Rena (a container ship) ran aground near Tauranga, New Zealand, on the 5th of October 2011, resulting in an oil spill. The Rena broke in two after enduring heavy winds and seas overnight. The ship was carrying 1,368 containers, eight of which contained hazardous materials, as well as 1,700 tonnes of heavy fuel oil and 200 tonnes of marine diesel.On 11 October the spill was declared New Zealand’s worst ever maritime environmental disaster 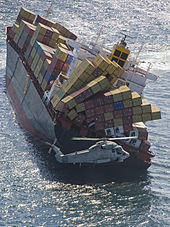